Iris is a sanctuary resident. 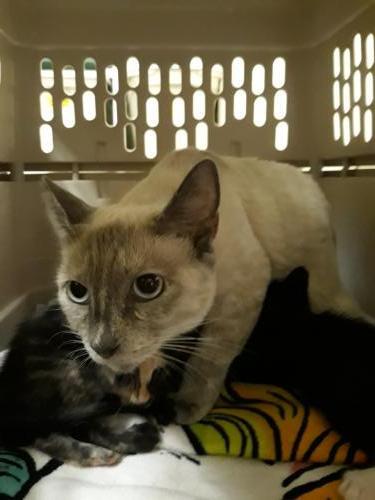 Iris was a sweet mama of four kittens. She's a cuddlebug lover who gets along great with everyone she meets. She's been fostered with cats, dogs and children and does well with all of them.  She loves her food and may try to beg like a dog for table scraps. She is a big cuddler who loves to sleep with the foster. She is more of a calm cuddler than a toy player. She would be perfect in a home with anyone who would like a personal heater from a very sweet girl.

FIV (feline immunodeficiency virus) is a widely misunderstood condition. Many people think that it’s easily spread, makes cats very sick, and that they have a lower life expectancy, so they are not often adopted. This is far from the truth!

When a cat tests positive for FIV, it means they either carry the virus or have been vaccinated for it at some point (which causes them to test positive for the disease, which is why this vaccination isn’t recommended, among other reasons). FIV is not spread through casual contact such as shared food/water/litter, mutual grooming, or playing. It is most commonly spread through deep, vicious bite wounds typically inflicted by intact toms fighting on the streets over food, females, or territory. If a cat has been spayed or neutered, they are unlikely to fight in this manner, and if the population is stable (no serious fighting), FIV+ cats can live with non-infected cats. (It was previously thought that FIV+ pregnant queens could pass the virus to their kittens, but this has since been disproved according to one study.

FIV+ cats can live as long and healthy a life as non-infected cats. This doesn’t mean they will never become ill; they are, after all immunocompromised, so illnesses can be easier to catch and harder to fight off. They have the same needs as any other cat: high quality food, a clean, stress-free, strictly indoor environment, regular veterinary visits (two times per year), and lots of love!